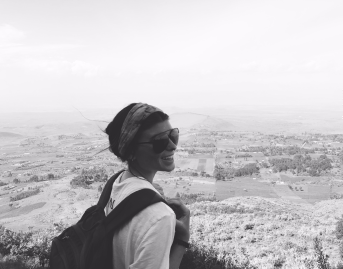 When I was around four or five years old, I attended another classmate’s fifth birthday party. The mani-pedi party was at a day spa, which had a gift shop with various little items at the front of the building. When the party was over, a few other little girls and I stood at the front of this gift shop as we waited for our mothers to pick us up. We each held a bag we were given as a party favor and I can distinctly remember grabbing a bracelet off of one of the displays and quickly slipping it into my bag. We all giggled at the prankish act and everything was fun and games…until I got home and realized what I had done. I had stolen something.

When I realized my wrongdoing, I hastily grabbed the bracelet and threw it on the top shelf of my closet, in the back, where no one would find it. For months, maybe even years, the weight of what I had done weighed heavily on my young heart. I remember being petrified every time I would see a police officer because I just knew that if someone were to find out, I was surely going to jail (funny, I know). It was the first time I can ever remember feeling an emotion similar to shame.

Finally, one night, this weight of my secret crushed my pure little heart and I told my Mom what I had done. She soothed my worries as I cried and then gracefully retrieved the bracelet from the top of my closet for me because I couldn’t reach it myself. The next day, she took me back to that very spa where I had committed my “crime” and firmly led me to the checkout counter. She handed me a ten-dollar bill to give to the lady behind the counter and guided me through my first act of penance. We left and it was over. We never spoke of it again. My mother helped me to feel the freedom of making right what I had done and then leaving it in the past, forever. She modeled grace to me.

In hindsight, I know now that the feelings I was having were probably something more along the lines of intense guilt rather than shame. I was five. There was no way that I could possibly understand what it was like to truly feel shame. Not the way I do now. You see, shame is different than guilt. Guilt is feeling bad or remorseful because you know you have done something wrong. Shame is a painfully intense self-evaluation. Shame is feeling as if you are flawed, undeserving, dirty, inadequate, and irredeemable (sound familiar?). Guilt is an often-easy reparation. Shame runs deeper.

Years after I walked out of that spa with my mom, I found myself realizing that the bracelet kept finding itself tucked away in the back of my closet. Only this time, it wasn’t tangible. It had taken on newer, much scarier forms and those same feelings of the weight of what I had done ran much deeper inside of me.

I’ve been taught and believed in the story of grace my whole life. The greatest act of love mankind will ever know in which I was delivered from the darkness, out of the bounds of my chains, and invited to live in the Kingdom of God forever. But somewhere along the way, I took up the notion that I had to carry my burdens until I said it was enough. Until I said I had “done my time”. Until I could finally let it go. No one wants to admit this. If you’re like me, you want everyone on the outside to think you are the perfect Christian, the perfect daughter, the perfect girlfriend, the perfect friend. The perfect girl who goes on mission trips, leads bible studies, and posts Hillsong worship songs and Christine Caine quotes to her Instagram story. Don’t get me wrong, I love me some Jesus and I love doing all these things as well. But let me be clear: I HAVE MESSED UP and it’s been a long, emotional road trying to fix broken pieces from some of the self-destructive things I have said and done. I have spent mornings in my car ugly crying over my shame, right before I had to pull myself together for an 8 am. There’s something you won’t see on Instagram. I have often let shame consume me instead of listening to what God says about who I am and, more importantly, who He is.

One thing I’m learning is that shame is a universal feeling. More than likely, you can probably resonate with a lot of the things I just said. Something I like to do when I’m dealing with overwhelming emotions, whether it’s shame, anxiety, or fear, is write down truths. Truths from the Word that was given to us to speak life. Truths that remain constant…even when our emotions don’t.

Truths about you and me–

You have been set free. Galatians 5:1 “It is for freedom that Christ has set us free. Stand firm, then, and do not let yourselves be burdened again by a yoke of slavery.”

Your sins have been scattered. Psalm 103:12 “As far as the east is from the west, so far has He removed our transgressions from us.”

You can be made new. 2 Corinthians 5:17 “Therefore, if anyone is in Christ, he is a new creation. The old passed away; behold, the new has come.”

You are so much more than the decisions of your past because you have been chosen for future good works. John 15:16 “You did not choose me, but I chose you and appointed you so that you might go and bear fruit—fruit that will last—and so that whatever you ask in my name the Father will give you.”

He is forgiving. Micah 7:18 “Who is a God like You, who pardons sin and forgives the transgression of the remnant of His inheritance? You do not stay angry forever but delight to show mercy.”

He is not overwhelmed by any sin. Romans 5:20 “The law was brought in so that the trespass might increase. But where sin increased, grace increases all the more.”

He left that shame on the cross. Hebrews 12:2 “fixing our eyes on Jesus, the pioneer and perfecter of faith. For the joy set before Him he endured the cross, scorning its shame, and sat down at the right hand of the throne of God.”

If you haven’t caught on by now, God’s redemptive love looks a whole lot like the story of my mom and the bracelet…but it’s a thousand times greater.  We can rest in being able to cry out to Him, “I have fallen short of Your glory, God and I am in need of Your mercy and Your guidance.” And He forgets. And you are still His. His wonderful, wiped clean creation that was made for greater things to come. A blank slate. I’m still working on this whole shame thing right now. I’m talking to people, journaling, and praying out loud to put the shame out in the open, into the light. It can’t hold as much weight in my soul when it’s there. The good thing is that it’s nothing I could ever do and it’s nothing you can ever do. It is Him working within us by grace that is given 100% freely because he is THAT good. You just have to give Him the bracelet and let Him do the rest.

Isaiah 54:4 “Do not be afraid; you will not be put to shame. Do not fear disgrace; you will not be humiliated. You will forget the shame of your youth and remember no more the reproach of your widowhood.”

9 thoughts on “The Shame Bracelet.”

This site uses Akismet to reduce spam. Learn how your comment data is processed.

learning and writing about this journey we call life. waiting to be discovered as a celebrity comedian. making breakfast a day long event. View all posts by kaynewhittle